In this post, you'll discover the best craigslist personals replacements for getting laid like we did back in the good ol' days, before the shut down of casual encounters in 2018.

We've included both classifieds replacements, like Doublelist, as well as hookup sites, swinger sites, and M4M/gay apps like Grindr.

We're covering a lot of alternatives for you in this guide.  Here's an overview of the sites we tested as part of our research.

Reviews of The Top 10 Personals Replacements

Some alternatives, like Grindr, are gay only and i've marked them as M4M (male for male). 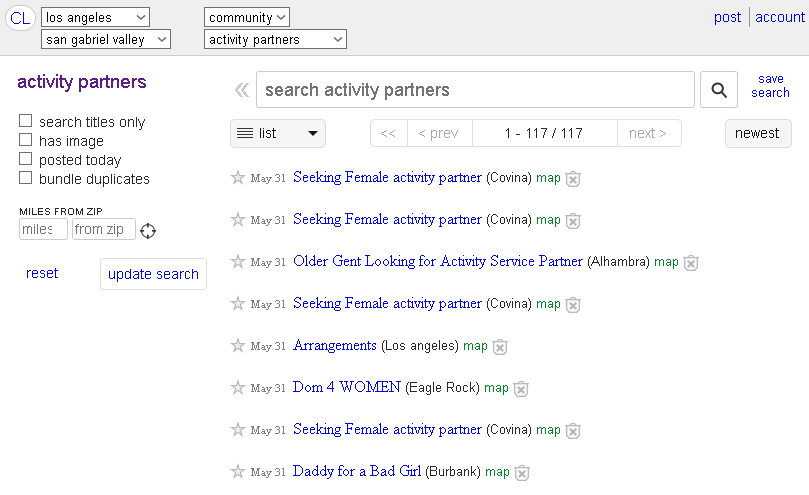 The first place you should try posting is in Craigslist Activities on the upper left corner of CL.  Many people just switched to posting their casual encounter ads in this section after personals was shut down.

You can't post pictures here, so the biggest downside (or upside depending on who you talk to) is no more nudes.  You also can't use as raunchy titles because the area is meant to be for anyone looking for a partner for anything, not just sex.  Sometimes people post ads for a band member or their gaming group, but it is very rare.  In most USA towns 95% of posts in Activities are now for sex.

Don't worry that the section isn't as porn-y as personals used to be.  Yes, it's not as titillating to browse, but you still find just as many people, and once you swap emails and phone numbers you can pick up from there exactly like you were using craigslist personals again.

Also, certain cities haven't quite made the switch to Activities as others.  So if your city doesn't have an active personals section, consider trying some of the other top sex personals sites, below. 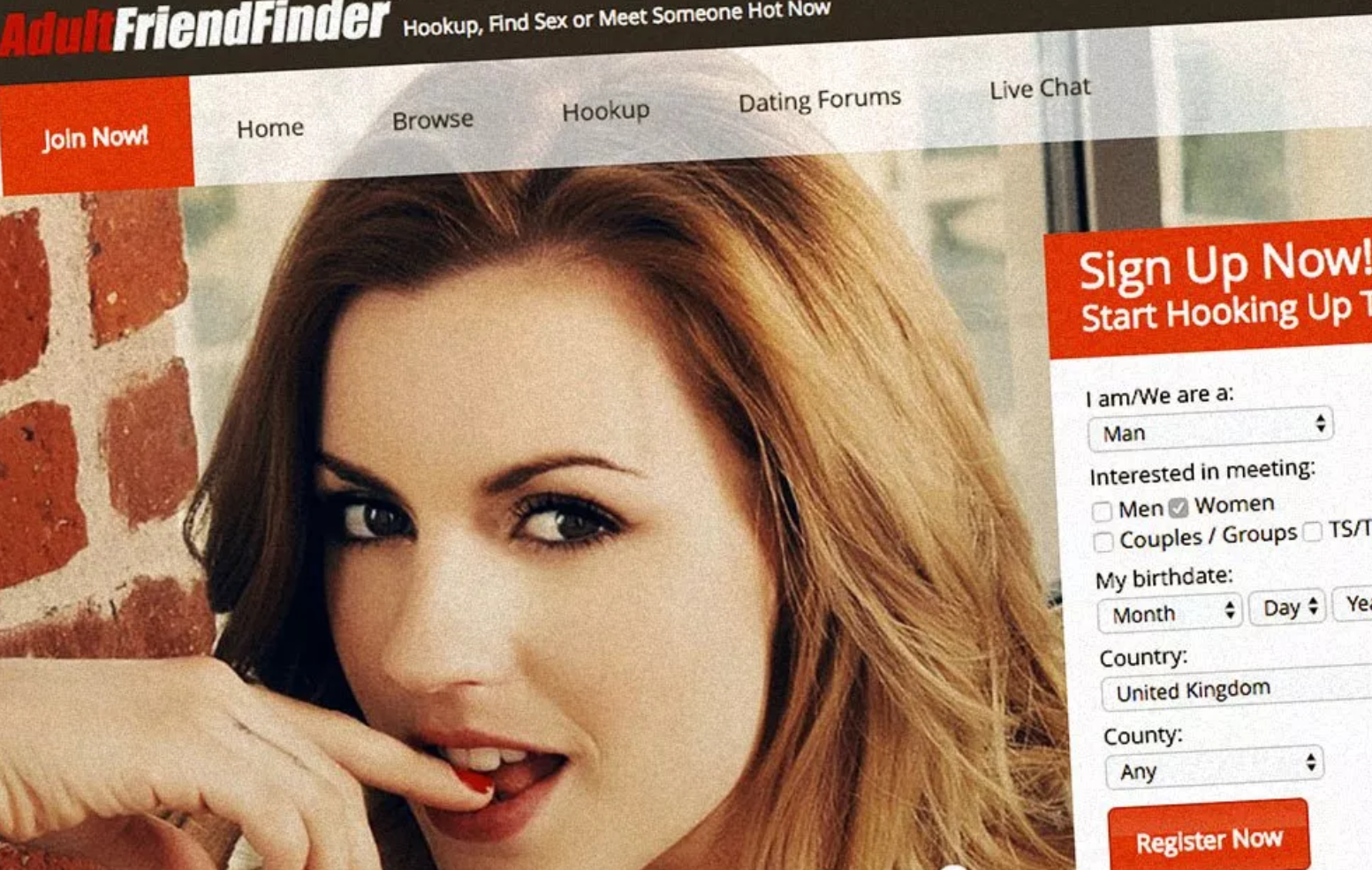 Adult friend finder is the biggest online community for casual sex and no string relationships. Like Craigslist personals,  you'll see personals ads in your newsfeed with pics or just descriptions of hookups people are looking for.

Personally, this is the site I have had the most success with after the shutdown.  It is the most similar site like craigslist personals when it comes to results.

Many of the people I meet with on AFF were regular CL users back in the day.  Usually we agree AFF isn't perfect, but it gets the job done and has some cool features like cam-to-cam chatting, voice chat, forums, profiles, and your own blog. 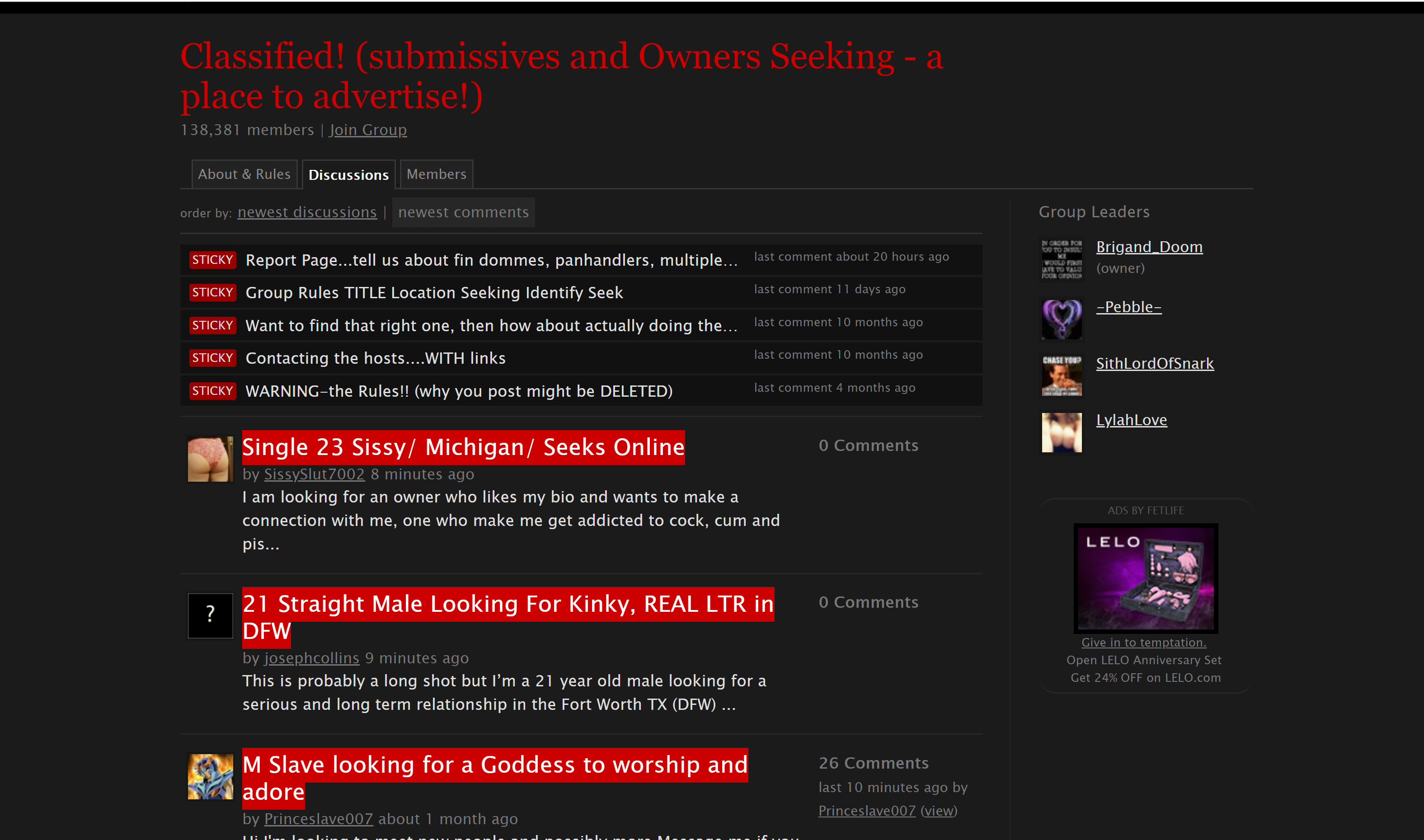 Did you know that Fetlife has a classifieds section?  It's like craigslist personals, but with an even kinkier crowd.

Browsing their listings you'll see personal ads full of whips, chains, and leather.  Slaves post ads seeking masters, 'hunters' post ads seeking 'prey', and 'riggers' post ads looking for 'rope bunnies'.  If the idea of that sends curious tingles up your spine, then this would be a craigslist personals replacement worth trying.

One of my pet peeves about this alternative is that it works kind of like facebook groups.  So you have to have a profile and register to use it.  The groups are created by users, the biggest one is called 'Classified' and has about 140,000 followers.  The problem with this is that it's something everyone in the world sees, so it can be tricky to find people locally.  If you are in a big city like San Francisco, they have a classified group for hookups and casual sex dedicated just for that area.

Locanto has been around as long as craigslist personals, but they were always second best in the classifieds game.  Now that craigslist took down their casual encounters section, they've handed the their personals business to Locanto on a golden platter.

To search for casual encounters near you, use the search bar to enter your city's name.  From here you will see the same categories as craigslist personals.  Pick your favorite: women looking for men, M4M, trans, fetish, couples, etc.

Each ad shows the location of the poster, their age, a headline, and then the body of their ad.  People also have the option to post some sexy pictures.  This is one of the things I loved about personals, so it's good to see it still exists on Locanto.

Even though it works like craigslist, Locanto doesn't have as many people as personals still.  Another pet peeve I have is the ads they sneak into the actual listings, they do label them as 'sponsored' in the corner, but other than that they look like real ads, and can be a bit annoying. 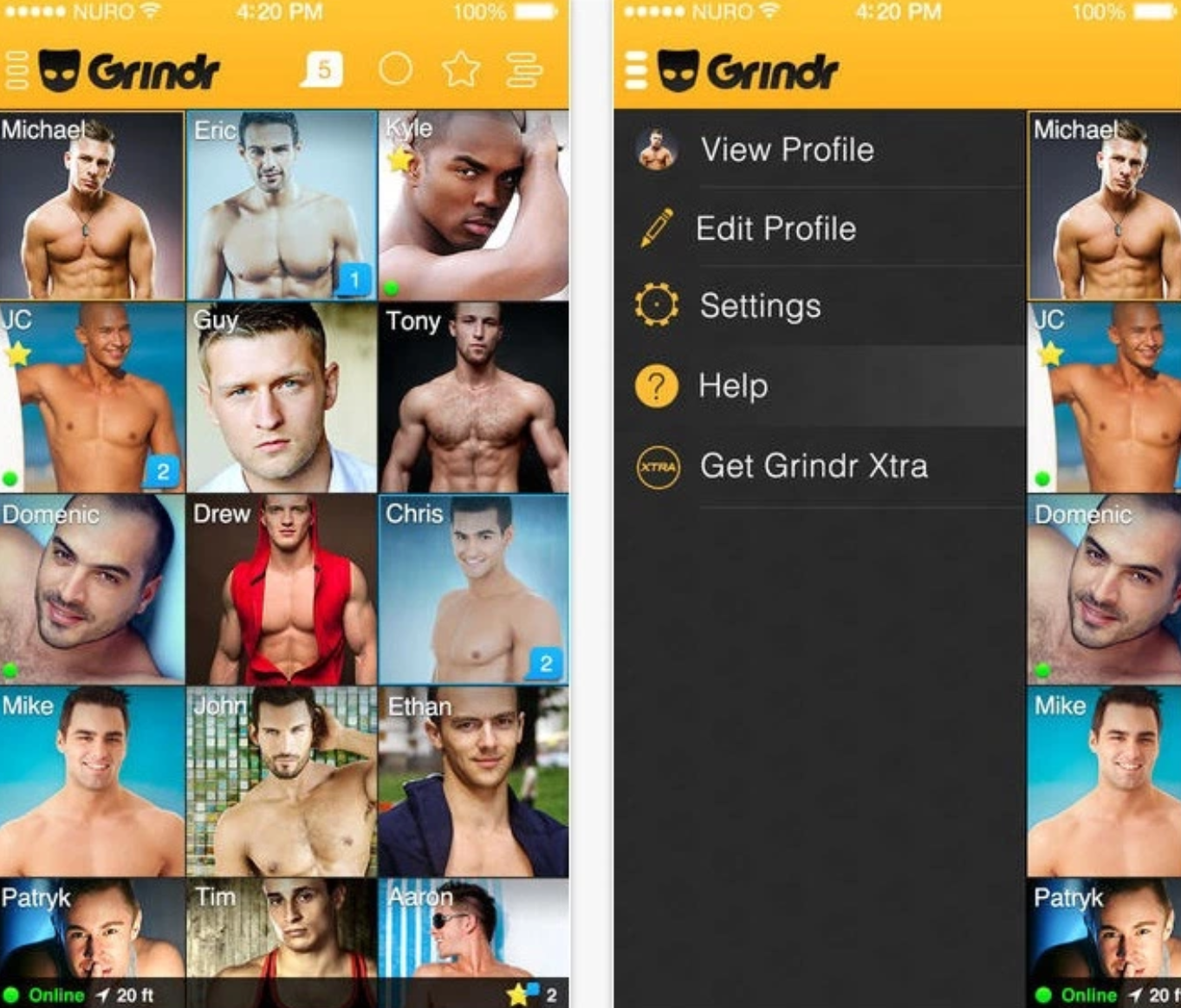 If you loved the M4M section of craigslist personals, then Grindr is a good gay alternative to check out.  It works for gay casual encounters only, kind of Tinder, but just for gay sex.  Like Tinder, it's also free and easy to use.

It's a very visual personals alternative.  It will automatically use your location to show you guys near you in a grid you can scroll through.  It shows each guys' profile picture so you can quickly tell if it's someone you want to chat up.  If you do like them, just message them and wait for a reply.  One trick is to message people who are currently online, shown by the green light on their profile picture.  The owner says that at any given time there are 300,000 people using the Grindr app. 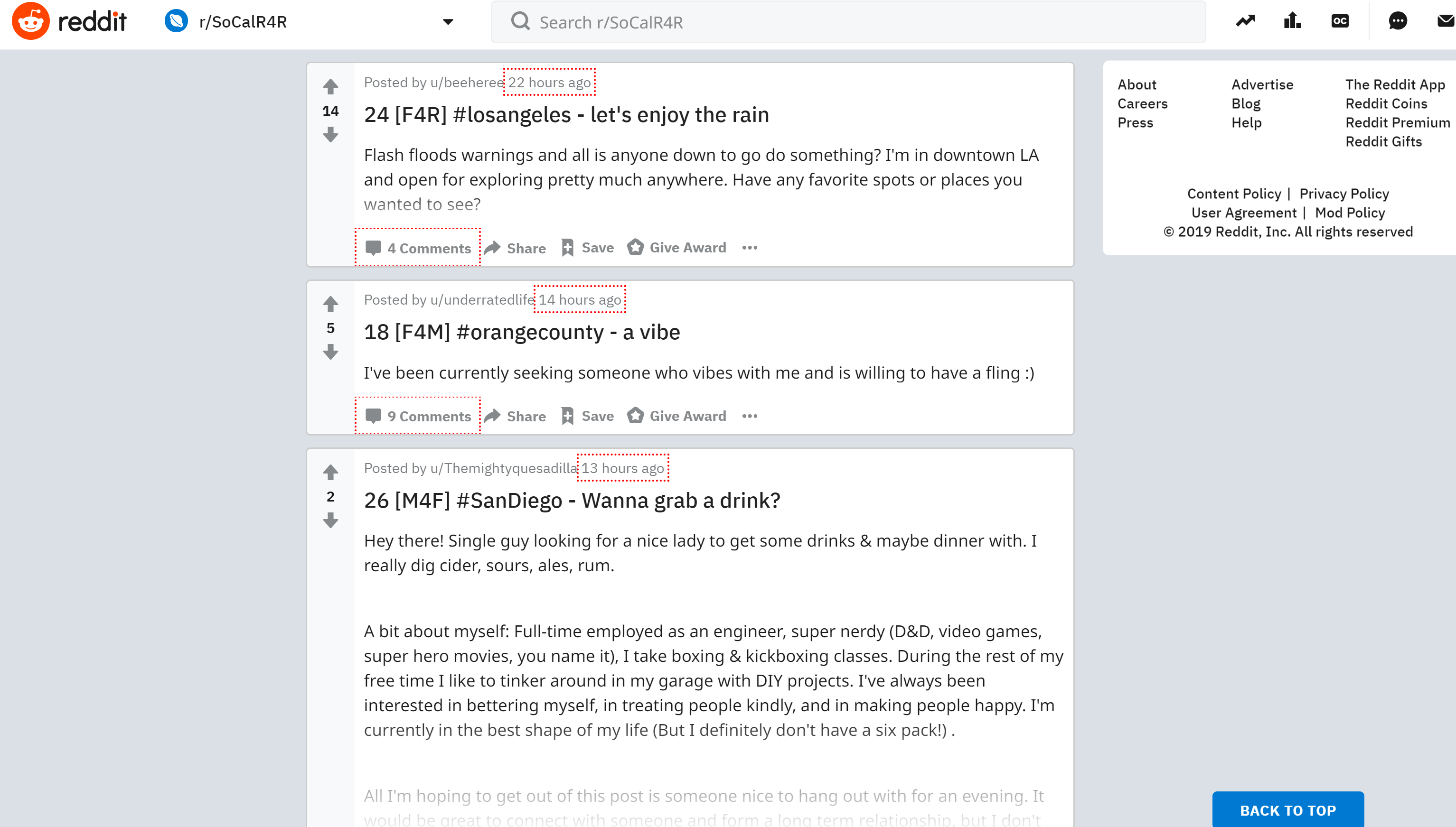 Reddit has different sub-reddits called R4R, which means redditor for redditor.  If you already have reddit it's easy to post an add, but you can still browse ads, even if you don't have an account.  You'll find M4F,  F4M, M4M, and others.  There's also no spam because each section has moderators.

The only tricky part about R4R is that you have to find ones for your city.  To help you out i've put together a list of R4Rs to help you get started.  Right now the biggest one is SoCal (southern california) which gets dozens of new posts everyday.

To find one for your city, just google 'city name + r4r'.

The main downside of this craigslist personals replacement is that it only works for larger cities. If you live in a more medium sized city, try looking for your state's R4R, or posting in the nearest large city to you.

Some people used craigslist personals to find escorts, after all, that's one of the main reason the took it down--they didn't want to get busted like backpage did.

If you prefer escorts as a way to get sex, then Switter.at is a good place to search.  It's like a mix between twitter and craigslist personals.  Different escorts, aka providers, have accounts on the site where they post to their feed.  You can follow them and see when they post rates, or even just post about their day.  This makes it a unique alternative, you can actually follow and keep up with the day to day activity of your favorite sex workers.

Once you create an account, go to http://switter.at/listings and put in your city's name.  You'll be shown all the hookup opportunities near you and how much it will cost.  Rates vary from $100 an hour to $600 an hour at the most expensive.  You get what you pay for though, and switter is home to some of the most attractive women and sex workers.

This was one of Craigslist's main competitors and a popular alternative I used to use.  When Sesta was announced and Craigslist took down its personal ads, i'm sure the owners of Doublelist were jumping for joy.  They have a unique system for a classified site: they require you to create an account and verify it with your phone number.  This is light-years ahead of what anyone else is doing online right now.  By having an account and making the ads private they bypass the SESTA law and essentially make the world's best craigslist personals replacement.

The obvious downside is that is kind of annoying to have to put your phone number in to make an account, but hey, it beats running into spam and having to pay.

The community on the site is a lot like craigslist personals.  You post ads, with or without pictures, and then people reply and you can reply in turn.  You can include your phone number, where you live locally, and any other details about what you are looking for in a date.

Kinkyads.org is meant to be like craigslist personals, but 'for kinksters by kinksters'.   It's a good place to search for casual encounters if you want something more than just vanilla sex.

For casual encounters near you, try searching by city.  Then narrow down your search even more by using the fetish categories.  If you love feet fetishes, bondage, or ABF, then this is a great site to add to your bookmarks bar.

In addition to the sites above like Adult Friend Finder and Reddit, there are some good gay-only alternatives to craigslist personals.  If I had to make a rough guess, I would say that about 50% of all sex listings on Craigslist Personals were for non-straight sex.

If You Love M4M, Use Grindr Instead of Craigslist

If you only want to find male for male casual encounters, then Grindr should have been what you were using anyways, why are we having this talk now!

But seriously you can see pictures of people that live in your local area, you can see people's pictures, and match with other gay singles.  Plus it's all free, it's about as perfect as it gets for a gay hookup website / app.  The downside with a free service is that there can be the occasional spam that is not an actual person and is just a fake account trying to get you to view their webcam or something fishy.

Why Did They Take Craigslist Personals Down Anyway

Craigslist made the decision to take down personals after the government passed a law called FOSTA - SESTA.  This law now requires all sites to moderate their ads and holds them responsible for any illegal sex trafficking done on their platforms.  So if someone used craigslist personals to sell an underage person as a prostitute, Craigslist themselves would be charged with prostitution and face the legal consequences.  Obviously this is not something that they wanted to deal with and they don't have the staff to moderate millions of new online ads a day, so instead they decided to shut the casual encounters section down.

And they aren't the only ones.  Many of the best sex dating sites across the internet are now returning 404s as they pull the plug and go out of business.  The only legal sites are ones that don't have an ad posting format such as dating sites like tinder, AFF, and other alternatives listed above.  These sites require you to give over your full name and identification which makes them not liable in the case of sex trafficking stuff.  In my opinion there is nothing stopping sex traffickers from making a fake account to find people on tinder, etc.  Also, I think many of us would be just fine with using Craigslist Personals with an account, so some people are still trying to get Craigslist into an account system for posting new ads.